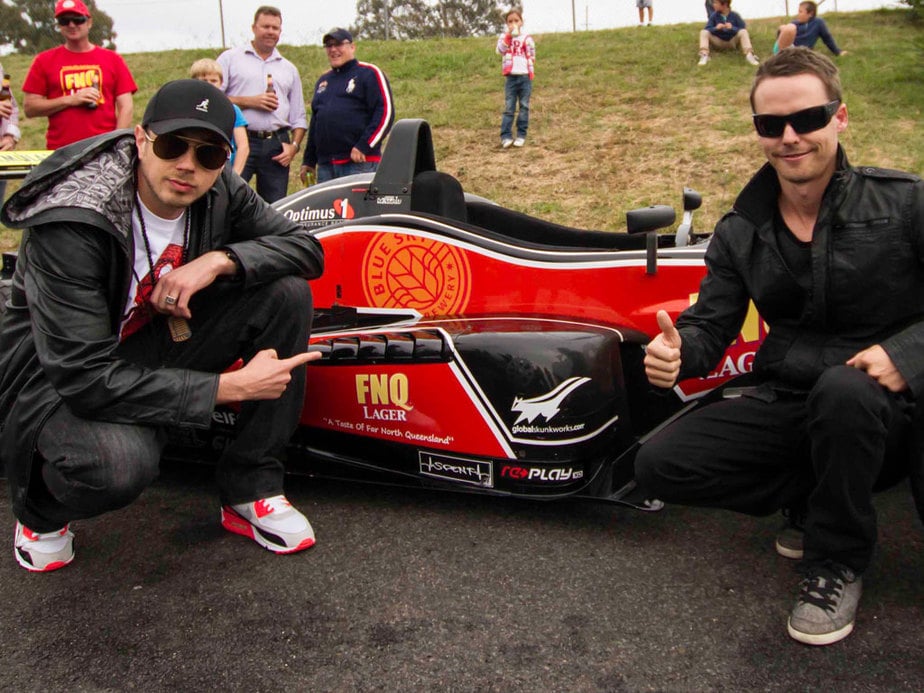 THE Formula 3 Australian Drivers Championship will be battled out between team mates after John Magro led Tim Macrow to victory in Round 6 of the championship today at the Phillip Island Grand Prix circuit.

The Queenslander stormed to a decisive victory in the feature race today and closed the gap to championship leader Macrow to 34 points ahead of November’s finale at Sandown – a margin that whilst large, is not unachievable.

Magro’s fifth race win of the year – and his second major feature race triumph following his success at Sydney Motorsport Park this July – was done after leading from lights to flag in a 12-lap affair. Behind Macrow, Mygale pilot Nick Foster finished third however now sits outside of championship contention.

“It was perfect – I don’t think I could have done any more with it this weekend and it’s a credit to Team BRM who have again done an awesome job. Sometimes weekends like this just come together. It’s nice to be able to score another victory in this fashion and keep the championship alive into the final round.”

Team BRM will need to manage another inter-team championship battle this November, memories of 2010s climactic decider between Ben Barker and Mitch Evans sure to be replayed in the teams mind between now and the Sandown finale’.

The biggest difference between then and now is a significantly larger points margin between the two protagonists this time around.

“The margin is pretty big,” Magro said. “It would take a big mistake or a non-finish from Tim for me to have a chance at winning it, so we’ll just go there and try to win all three races. That’s all we can do.

“I’m just really happy to be able to take it to the final round of the year and have a go.”

Macrow was nonplussed about the fact his nearest championship rival was the only driver to beat him this weekend.

“John is a great driver and did a great job this weekend,” the 2007 champion said.

“I’ve been in this position before and know how to handle it. I’ve got the margin on my side and I know that the team will give me a great car at Sandown. I’ve won there before and I know I can do it again.”

Foster’s third place was reward for a challenging weekend that forced him to work his way through the field in race two, after failing to finish yesterday’s opening sprint race encounter.

He climbed as high as third in race two before running wide and slipping to fourth in the closing stages, but his race three drive saw him pressure Macrow for a majority of the race to get on the podium once again.

Foster remains third in the championship and dramas for his nearest rivals this weekend have almost ensured that is where the Mygale Australia / Team BRM pilot will finish the season.

Ben Gersekowski scored no points today after a high-speed collision with rookie Aidan Wright in race two saw both cars out of race two, at the 245km/hr turn one.

The pair went side by side into the corner with Wright hitting the inside kerb, which then caused his car to lose control and make contact with Gersekowski’s McDonald’s car; damage sustained forcing both out of the remainder of the day.

Gersekowski’s misfortune allowed Muzz Buzz driver Jordan Oon to jump to fourth position in the championship, placing Team BRM cars in first through fourth in the overall standings – a feat not before achieved in Australian F3.

Jack LeBrocq had a highly competitive return to the F3 Australian Drivers Championship in finishing fourth today, backing up an earlier podium position effort in the second sprint race.

The Forpark Australia National Class will also be decided at the final round, however class leader – and Phillip Island round winner Arrie Maree has an almost-unbeatable margin in F3’s race within a race.

Maree leads Todd Hazelwood by 44.5 points in the class championship battle, with 48 points available at Sandown should a driver score a ‘perfect’ weekend.

Todd Hazelwood and Jon Collins staged an inter-team battle for second in the feature, with the Fujitsu Racer edging out Collins by a tiny 0.03s

The final round of the Formula 3 Australian Drivers Championship will be staged at Sandown Raceway this November 15-17.

Action from Phillip Island will be aired on SBS Speedweek and SPEED TV Australia in coming weeks, presented by Reply XD Australia.