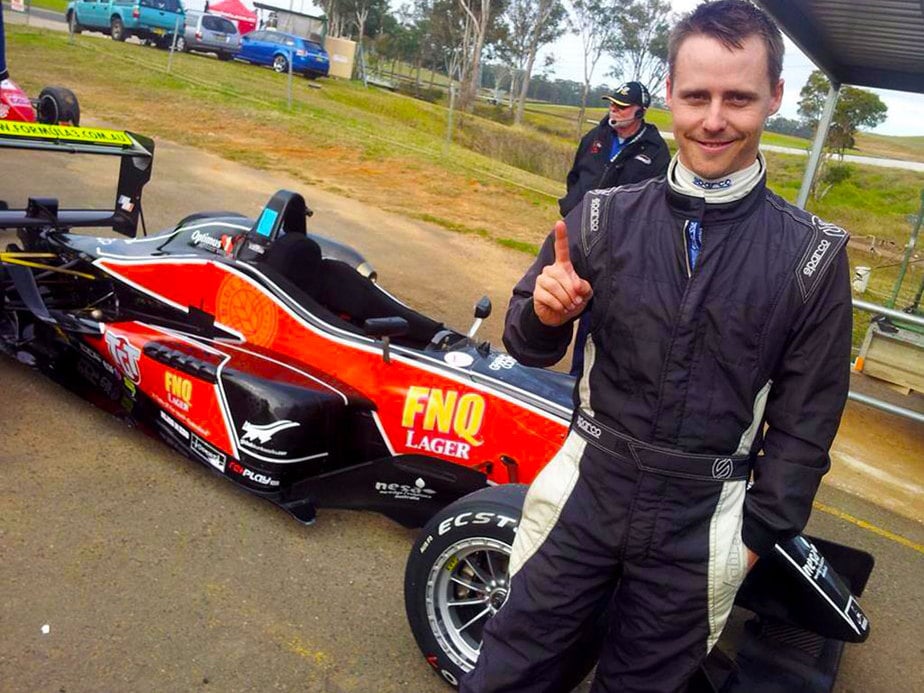 Starting from the third row, the FNQ Larger-sponsored Team BRM driver swept around the outside of his chasing rivals at turn one and survived two safety car interventions and constant pressure from Nick Foster and then title rival Tim Macrow to win his sixth race of the year.

With Macrow finishing close behind in second, Magro closed the margin to the championship leader to 31 points ahead of two races tomorrow – ensuring the title will go down to the final day of the season once again.

It will be tough for the North Queenslander, however, with 34 points on offer tomorrow Macrow only needs to finish the first race to seal his second Australian Drivers Championship and CAMS Gold Star award.

It wasn’t a good day if you qualified on the front row; Polesitter Nick Foster spun off the road at Dandenong Road mid-race, while Ben Gersekowski saw clutch issues leave him stranded at the line when the race began.

Foster failed to finish and Gersekowski finished seventh a lap behind; but Magro was the man of the moment today, posting what was perhaps his best ever drive.

“I’m not really sure what happened.. I just went around the outside when everyone was battling on the run into the first corner. When I pulled back across after the corner I was in front!” Magro said.

“We made some big changes to the car after qualifying and it was amazing to drive, I can’t thank Team BRM enough for their work.

“The car was so fast and I was able to hold on in front once I got there. It couldn’t have been much better.”

Formula 3 rookie Simon Hodge finished a super third, lapping within tenths of the leaders pace and following his Team BRM teammates to the line to score a podium finish on debut.

Hodge started fourth and raced confidently despite having to take evasive action to avoid the stranded McDonald’s Dallara of Gersekowski at the start. Gersekowski set a new Sandown lap Formula 3 lap record on his comeback drive, the new benchmark a stunning 1m08.3920s.

Jon Collins won a stunning Forpark Australia National Class race, holding out newly-crowned class champion Arrie Maree for the entire race despite having to drive with a damaged rear wing.

Maree formally clinched the National Class with his drive to second place today, his emphatic start to the season matched by late consistency to enable Gilmour Racing to seal their second National Class title.

The Mackay-based driver qualified on pole but Collins got the better start and from there the status quo was maintained until the flag, with Todd Hazelwood finishing third.

Earlier in the day, Nick Foster stormed to the second pole position of his season with a stunning lap, a full 0.7s underneath the existing qualifying record at Sandown.

The record lap ensured that new qualifying records were set at every circuit the championship visited this season – and the close competition ensured that the 2013 season was one of the closest ever in Formula 3 qualifying.

The average margin between 1st and 2nd this year in qualifying was just 0.20s, the second closest in series history.

Foster’s benchmark was set late in the session that had been headed to that point by McDonald’s / Gilmour Racing driver Ben Gersekowski – who matched his career best qualifying performance with second.

Arrie Maree edged out Jon Collins for pole in the Forpark Australia National Class, his last-ditch lap scraping him through just 0.05s faster than the Sydneysider in the Yarra Web Dallara. Todd Hazelwood qualified his Fujitsu racer third another 0.2s back in the closest top three qualifying performance of the class this year.