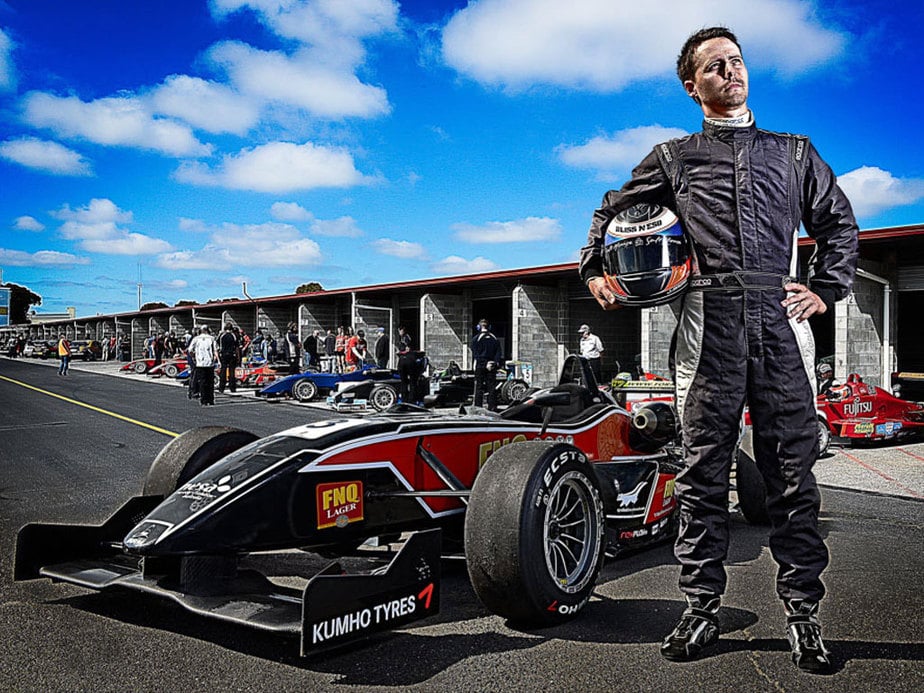 FNQ LAGER driver John Magro says today was ‘The day he had to have’ to remain in contention for the Formula 3 Australian Drivers Championship this year.

With just two podium finishes to his credit this season before today, Magro turned his year around in one day by taking both sprint race victories and closing the margin to the leading drivers in this years championship.

Magro qualified second and led both races today from start to finish in his Team BRM Dallara to record his fourth and fifth career F3 victories. He becomes the fifth different race winner from ten races held so far this year – showing the competitive nature of the 2013 championship.

The laconic North Queenslander said today’s turnaround has pushed his otherwise challenging season back on track.

“It was pretty much the perfect day,” he said.

“It was really good to turn things around after Darwin, where things were tough. We had an imbalance in the car in the first rounds and then we got caught up in other people’s dramas in Darwin and it was starting to hurt, but this is really, really good.

“I got the perfect start on both races and was able to pull a gap on the first lap or two of each race which was important. The car was just perfect and that made the races easy – it’s really looking after its tyres and is very consistent. It’s awesome and I couldn’t ask for more.”

Magro will start from pole in tomorrow’s 14-lap feature race and says the key will be the race start.

“It comes down to the start and that’s it,” he explained.

“Our car is great over a distance and if we can get in front, I’m confident we’ll stay there. Thanks to FNQ Lager for getting us here and to Team BRM for an awesome car.”

Tim Macrow was twice second today and extended his championship lead over Nick Foster to eleven points at the half-way point of the series.

Foster finished third in race one – after carving his way through from fifth after a slow start – and fourth in the second sprint race, behind Jordan Oon. Race two was notable for a 1-2-3-4 result for Team BRM – the first in Australian Formula 3 history.

Having started from pole, Nathan Morcom had a quiet day and left with fourth and fifth place results today, respectively.

Low tyre pressures cost him in the first race, Morcom’s R-Tek Dallara starting strongly but fading in the early laps before the car came back to him later in the race, when he was able to lap under the existing lap record.

In the most competitive weekend for the Forpark Australia National Class yet, R-Tek team mates Todd Hazelwood and Jon Collins each scored their first class victories today.

Hazelwood qualified on pole and raced to the first race win after a slow start from Collins, with Maree third. Collins returned serve in the second race to take his first win.

Maree scored solid points with a third and a second to continue to lead the class.

Earlier in the day, Nathan Morcom had stormed to his second pole position of the year in stunning fashion – breaking the existing track qualifying record to take the top spot, as he did at Bathurst earlier this year.

The Sydney driver edged out John Magro and Tim Macrow for second and third by the tiniest margin of 0.05s – the closest top three margin of the year.